Born in 1939.  A star-model before all the stars.  BLOW UP is still a reference.

She just signed with Élite and joins Carmen DelOrifice to be a beautiful not-so-young face of fashion.  Today, some girls start way before 14 and she is… well… 73

Her now-face to be discovered soon in publicity.  Courageous Countess Lehndorff ! 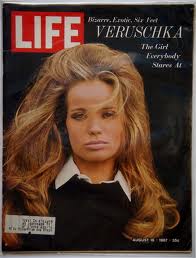 Great moments of this iconic film Blow Up:

veruschka on self: “pretty good”

What does one do for the woman who’s done everything? Well, when the woman in question is Veruschka, arguably the most photogenic person ever to look into a camera lens, the logical thing is to compile the very best snaps of her and issue a limited-edition book. Thus Veruschka comes to press courtesy of Assouline, and on Friday night, publishers Prosper and Martine Assouline hosted a fête for the most super of supermodels at the Mini Cooper space in midtown. Diane von Furstenberg, Lady Bunny, Agyness Deyn, and Glenn O’Brien were among the notables who hit the rooftop to pay their respects to the former Vera Gottliebe Anna, Countess Lehndorff, who was gamely signing copies of the thuddingly heavy tome she’d helped to conceive. “I can’t say that I have any favorite photographs,” she said. “Though I do have some favorite memories of the days they were taken. Working with Avedon, for example, was always a joy. But then it was all joy because that was a joyous time.” Was it particularly joyous to discover herself an icon? “I never thought of myself that way,” replied Veruschka, as avid autograph-seekers hovered nearby. “You know, when you’re doing it, it’s just life. But maybe later I looked back at some of my photo