Here is an interesting interview of her done by EYE PREFER PARIS Blog.
Eye Prefer Paris:Parisian of the Month: Patricia Wells

I am thrilled to have Patricia Wells for my Parisian of the Month. My first book I ever bought about Paris was her original Food Lover’s Guide to Paris in 1984. We met for our interview at Comme la Maison, my favorite place for hot chocolate in Paris, and I was gleeful that I could share with her a place even she didn’t know about.

Where were you born and where did you grow up?
I was born in Milwaukee, Wisconsin on November 5, 1946 (9 months to the day my father was released from the Army in World War II).

When and why did you move to Paris?
My husband Walter and I moved to Paris in January 1980. Walter was an assistant national editor at the New York Times and I was a food reporter. He was offered a job to come to Paris as a deputy editor at the International Herald Tribune. We thought it would be for two years, and I good idea for my career.

How did your interest in food start?
I grew up with always fresh, homemade food. My mother was Italian and always made her own pizzas, bread, pastries, lots and lots of cookies, she preserved everything. I guess that I grew up feeling that fresh food would always be part of my life.

What are some of the biggest differences in the Paris food world from when you first moved here in 1980 and now, both positive and negative?
Positive: Restaurants open 7 days a week; young chefs in outer arrondissements offering original food at reasonable prices; a less formal aire.

Negative: Too much chi-chi on young chefs from bloggers, etc, when in fact a lot of it is not totally original or spectacular; the loss of the brasseries which are now almost all pretty bad; too much media attention that turns chefs into stars overnight.

Which “hot” restaurants are overrated and tell us why?

At Frenchie, after reserving weeks and weeks in advance at Frenchie, I had the very same meal in June and December, smoked mackerel and sweetbreads. Not that I have anything against either but I don’t consider this the epitome of  « fresh, local, seasonal. » Also the service is horrible and at night so dark you have no idea what you are eating.

At Arpege, I have been « back and forth » with Alain Passard and his food, and is embrace of vegetables. What « broke the camel’s back » on a visit in July, when tomatoes and all summer vegetables were in full swing, I suffered a lunch that was mostly carrots, beets, turnips, and onions. Inauthentic I say.

What was it like working with Joel Robuchon on the cookbook you wrote with him?
It was heaven. For years I would walk from my apartment on Rue Daru in the 8th to his restaurant Jamin in the 16th, about a 30-minute walk. I would spend the morning with my notebook and pen, lots of questions, chefs ready to answer anything. When we got to working on a recipe for the book, they would weigh and measure everything, we would discuss, they would prepare it. But more than that was the ambience of the kitchen, the rapport of the chefs, the feeling that they and Joel were at the top of their craft. Always humility, always.

You sent me you new app., an updated version of your book The Food Lover’s Guide to Paris and I love it. Please tell us the details about it and how you developed it.
I had decided long ago not to update the book The Food Lover’s Guide to Paris since I had done 4 updates and that seemed like enough. But one day my husband Walter suggested I update it as an app. That seemed like the most perfert format for an app so I jumped in head first. I worked on it for 14 months, visiting and revisiting every old and new address and it was a joy. And we are getting great  response.

Your cooking classes have become one of your most successful ventures. How did you come up with the idea to start them and share with us what the experience has been like?
I began cooking classes in Provence in 1995 and in Paris in 1997. It was an experiment, to see how people would respond and how I would like doing it. It’s been great. It is fabulous to share my experience, knowledge, and surroundings with students. We have a fabulous time and it is wonderful to know we have this huge group of friends around the world that we would not have otherwise.

If there is one person living or dead you could cook dinner for, who would it be and what would the menu be? Would it be in your Paris apartment or your house in Provence?
I would like to mostly cook for nonfood people, like actor Matt Damon, singers Jane Monheit and Stacey Kent, and of course Barack Obama and Bill Clinton. We would eat in Provence, at Chanteduc, either under the oak tree or beneath the pergola.

Are you working on a new cookbook or anything new related to food?
Yes my next book has the working title of Cooking with Patricia: Lifestyle Lessons from My Two French Kitchens. It’s a gorgeous work based on cooking classes in two places, with lots of workable recipes, beautiful photos, and tons of tips. 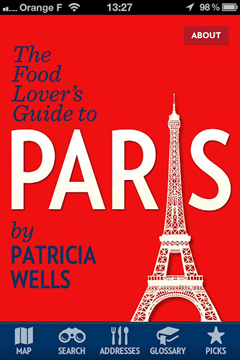 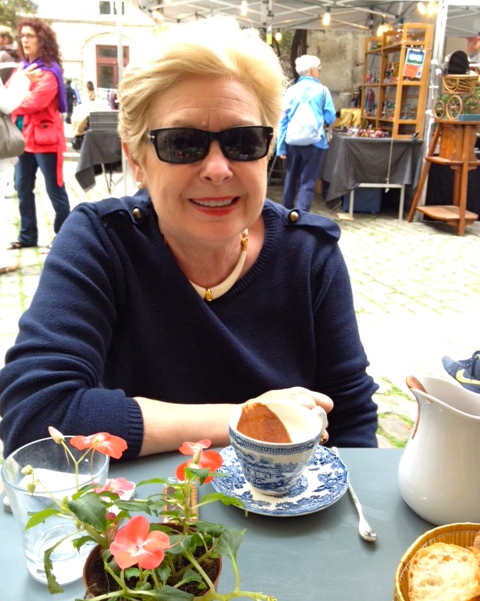 P.S. Her book on Paris Bistrots is very good!  She truely is a foodista, in the grand Julia Child tradition.