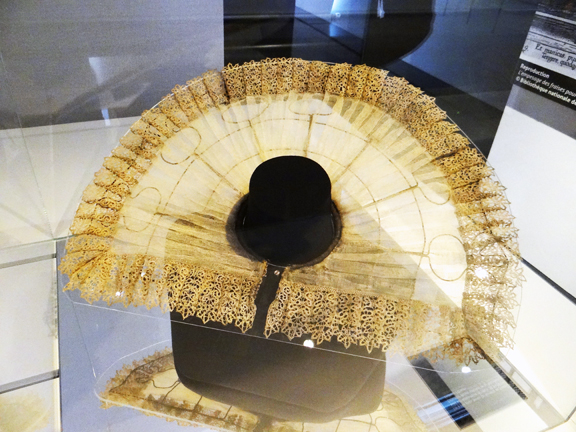 I am always looking for fun day trips from Paris and recently read about a fashion exhibit at the Lace Museum in Calais. I checked the train schedule and Calais was an hour and forty minutes from Paris and the fares were reasonable. I invited my friend Rosemary Flannery to come.

We arrived about 11:30 and walked through the quiet, working class city to get to the museum. Most people know Calais for its ferries to England but it is also the lacemaking capitol of France. The lacemaking industry started in 1816 coming from England and the original factory is very close to the museum. The Calais International Centre of Lace and Fashion was inaugurated in 2009 and resides in two buildings, one a former factory connected to a newly built modern building. Besides being a museum, it is an active center for the lacemaking industry with classrooms, seminars, and an auditorium for presentations.

Before we took in the fashion exhibit we toured the permanent collection. There is a room where with lacemaking looms and every hour on the hour is a demonstration of how the machines work. I never knew lacemaking was such an intricate and complicated process and the heavy machinery is also very noisy. We moved into the next room, which had more looms, sewing machines, threading machines, and other industrial devices for lacemaking.

The next rooms had mannequins with lace fashions through different decades, starting with long lace dresses from the late 1800s, then old fashioned lingerie including corsets and full slips from the 1920s, moving to modern day lace gowns and dresses from designers like Jean Paul Gaultier. The room has had other lace accessories including hats, fans, and shawls.

Another room traces the history of lace from the 16th to the 19th century. It explores the technological as well as the stylistic developments throughout the centuries. One of the more interesting displays was the sample books with thousands of patterns of lace in all colors and textures.

Now that we were fully educated and informed of the lacemaking process we proceeded to the exhibit we came for, Plein Les Yeux. The exhibit focuses on the relationship between the body and fashion throughout the history of Europe with costumes, haute couture dresses, accessories, photos, sketches, and paintings. We had a private guide, one of the co-curators of the show, for part of the exhibition.

The show is divided into five acts, giving it a more theatrical type presentation. The first, Ruff Times, addresses the oversized, extravagant collars and cuffs attached to men’s and women’s clothing in the late 1500s. The guide explained to us how the uncomfortable, sometimes stiff collars and the close fitting bodices on the women’s dresses affected the posture of the women and it’s one of the reasons why they had such regal posture. The guide also told us the lace workers in Calais made the lace dress for Kate Middleton’s wedding dress and they weren’t told whom they were making the dress for until the wedding was over. She said the workers were so thrilled and honored to have made the dress.

The next two acts, Blinded by the Light and Caged Bodies were the highlight of the exhibit. They explored the extraordinary decorative elements of the clothing plus how the body was enclosed in cage like shells. Many of the fashions were from historic films including the richly detailed costumes from Queen Margot from 1994, starring Isabel Adjani, Lola Montes from 1955, and a white dress trimmed in green velvet worn by Vivien Leigh as Scarlett O’Hara from Gone with the Wind. There also some stunning costumes Thierry Mugler designed for an opera in the 1990s.

One of the most fun parts of the exhibit was the wardrobe department. There were sample garments on a rack along with dressing rooms and mirrors. I snapped some cute little girls fantasizing becoming fairy tale princesses in the mirror, trying on long skirts and cages.

We spent almost three hours at the museum and had a nice long lunch with excellent regional food at Histoire Ancienne, so we didn’t get to see that much of Calais.

I think the Museum of Lace is a fruitful daytrip and if you could make it to the Plein Les Yeux exhibit, it will be worth your while.

The Calais International Centre of Lace and Fashion
135 Quai de Commerce,62100 Calais
It’s a 10 to 15 minute walk from the Calais-Ville train station.
http://www.cite-dentelle.fr/?lang=en

Calais is an hour and forty minutes by TGV train from Gard du Nord station in Paris. The train goes to Calais-Frethun station and you must take the local shuttle trian to Calais-Ville station to get to museum.
Thank you Eye Prefer Paris blog for this charming tour. 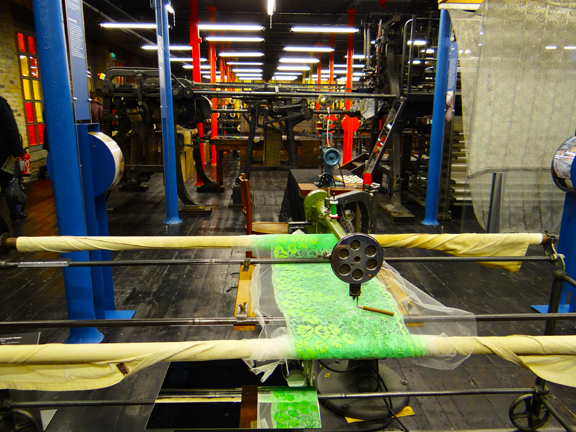 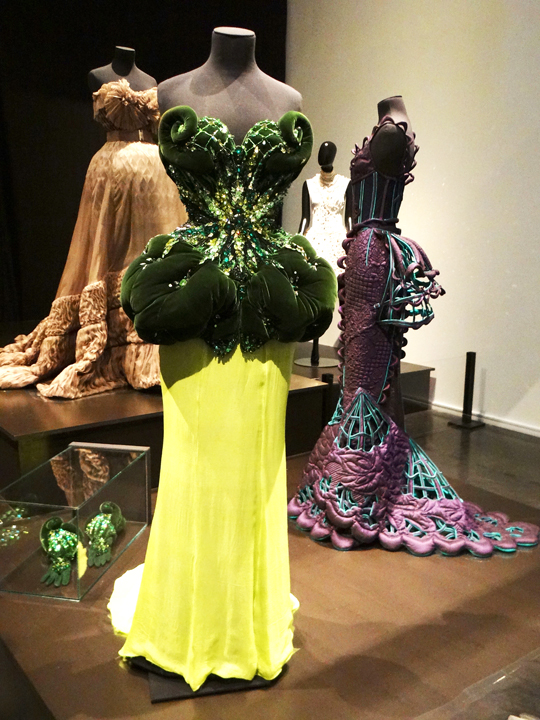 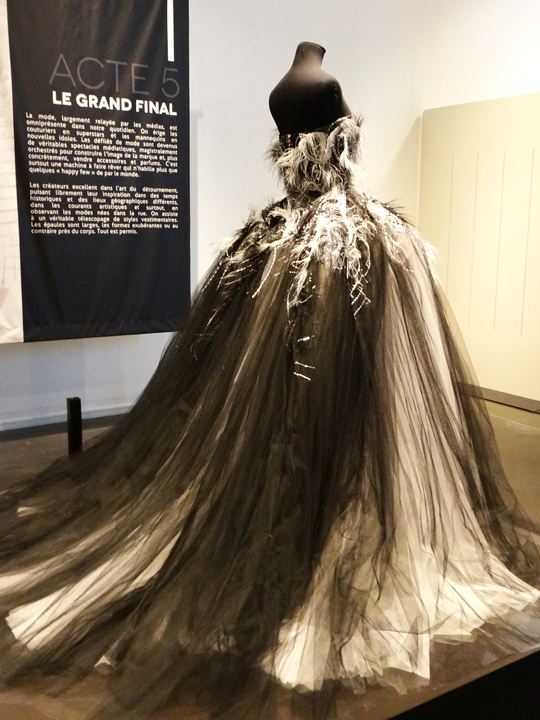 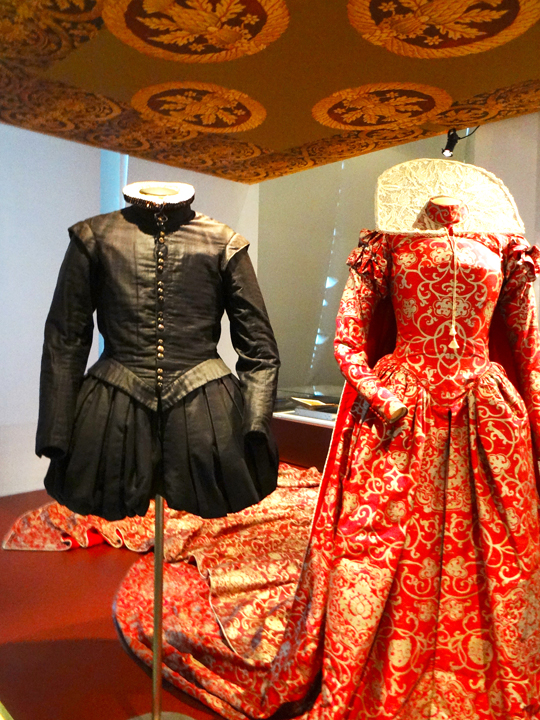 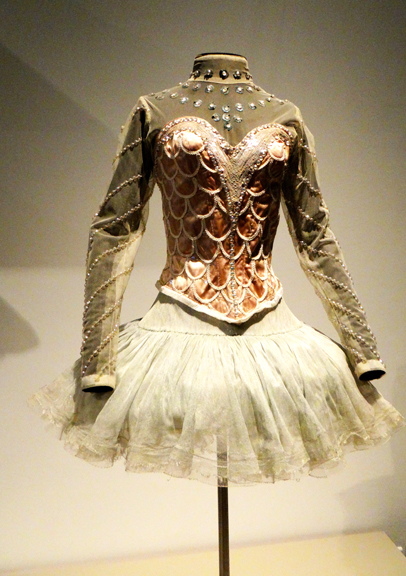 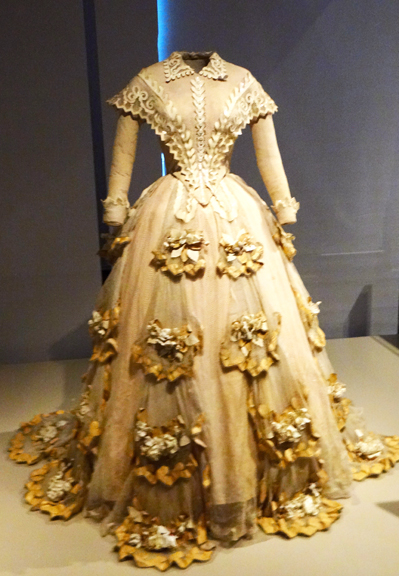 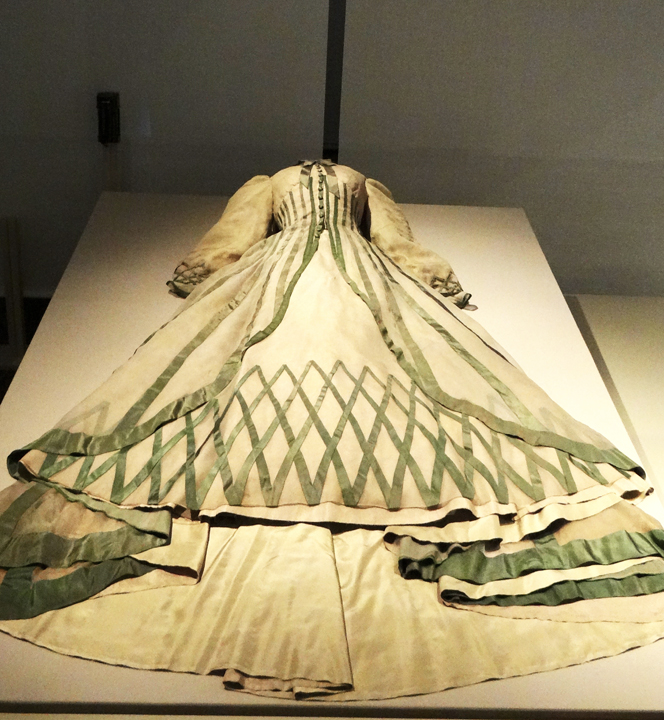 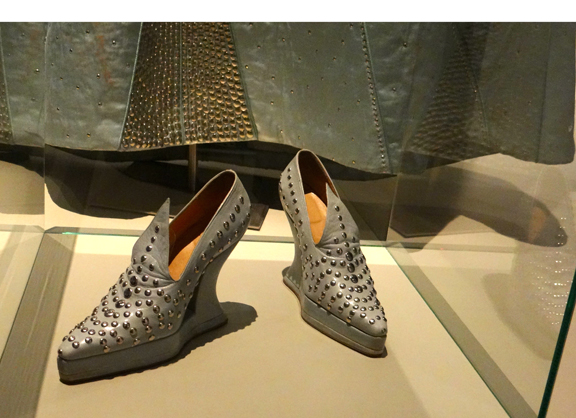 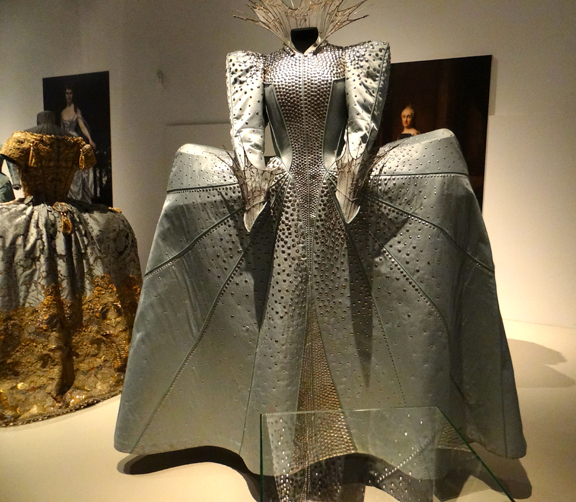 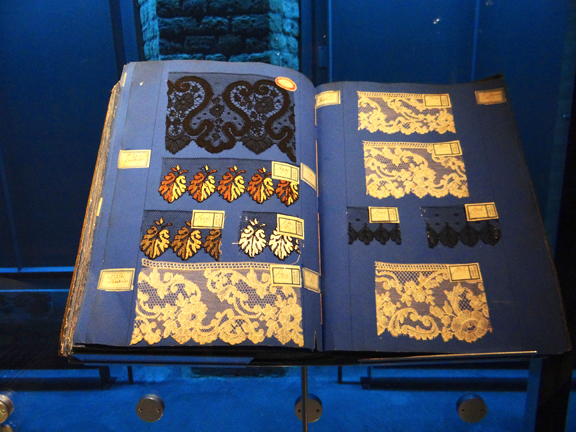 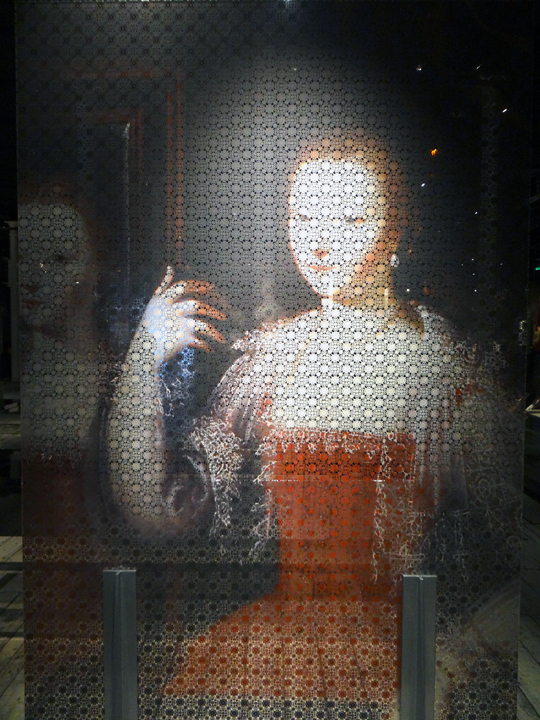 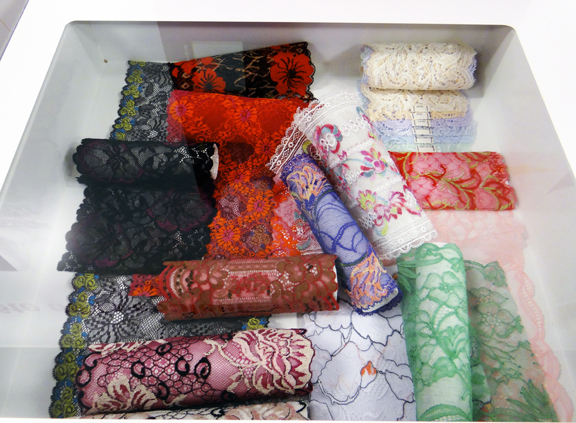 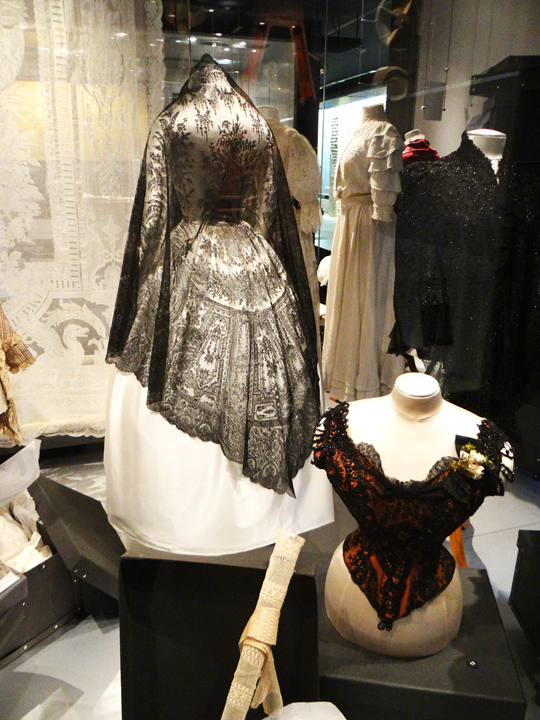 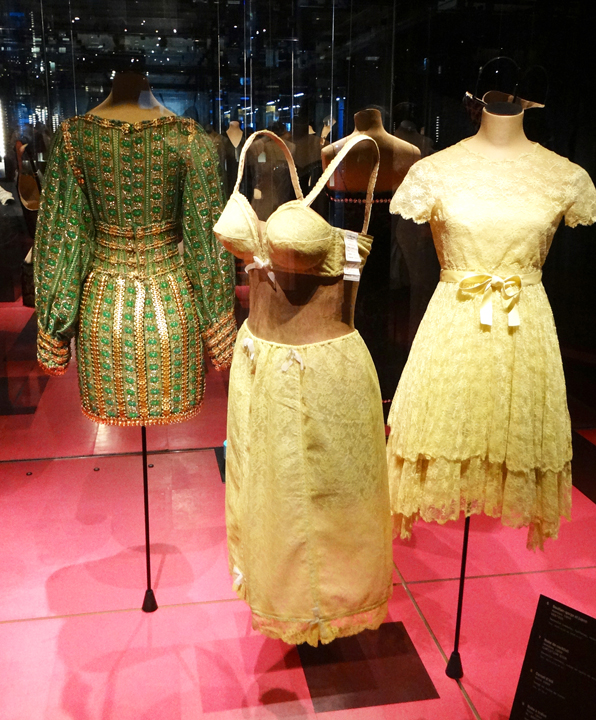 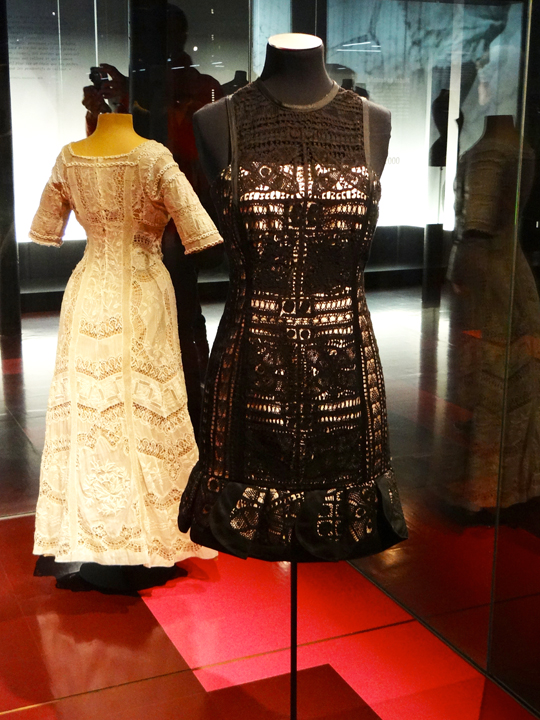 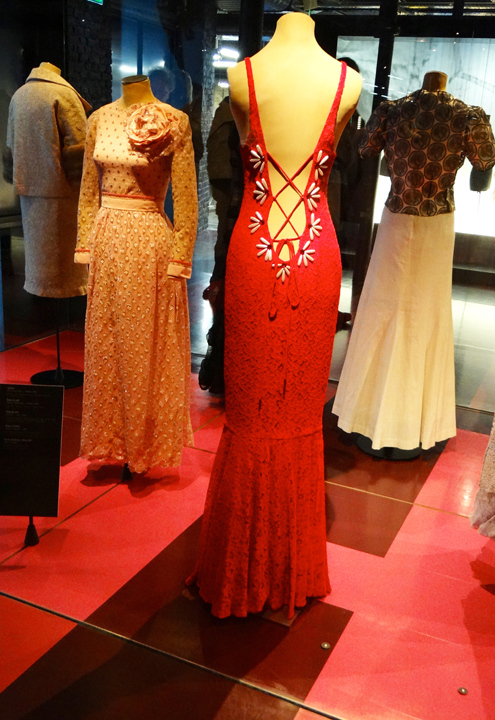 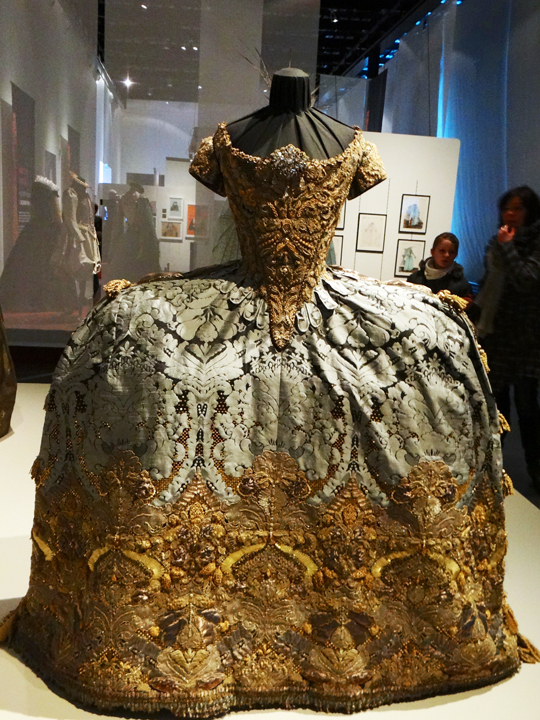