A tribute to my dear friend NORMAN GIMBEL, one of the greatest lyricist then and now…

As the point person for the 2012 BroadwayWorld.com New York Cabaret Awards, I was sent in early November the entire list of nominations in the 20 Award categories so they could be vetted for accuracy (to make sure the nominations were in the right category, whether they were actually 2012 shows, etc.). Scanning the list of Male Vocalist nominees I noticed the name Jeff Macauley, who in August staged the first of what would become seven tribute shows to a lyricist named Norman Gimbel. Talk about double obscurity. Although there was something about Gimbel’s name that rang a bell and I soon remembered that he was the man who wrote the lyrics (with music by Charles Fox) to Roberta Flack’s 1973 Grammy Award-winning « Killing Me Softly With His Song, » which folk singer Lori Lieberman has long claimed was inspired by a poem she wrote about Don McLean (one of my musical heroes). But I still didn’t know anything about this guy Macauley or why he was an Award nominee.

Now I know. This past Saturday night, I was finally able to catch Macauley’s show, It Was Me: The Lyrics of Norman Gimbel, and found it to be one of the most charming cabaret shows–whether from a man or woman–that I saw this year. Macauley doesn’t possess a particularly powerful voice or a wide vocal range, but he has a smooth, endearing baritone that can occasionally hit tough tenor notes, and for this show he displayed a knack for offering interesting and humorous biographical anecdotes as if he were a smooth jazz FM deejay. Dapper and Mad Men-esque in a tight black suit and black bow tie, Macauley presented his show sounding like a classic « lounge lizard, » but in the best sense of that term.

Norman Gimbel was, as Macauley called him, « a musical Zelig, » whose lyrics could range from quirky to romantic, and who could adapt to many musical styles from an Antonio Carlos Jobim bossa nova (Gimbel wrote the English lyrics to Jobim’s « The Girl from Ipanema » and to Pablo Beltran Ruiz’s « Sway ») to a song from a Hollywood film drama (the 1980 Oscar-winning « It Goes Like It Goes » from Norma Rae), to a 1970s pop tune (the Jim Croce hit « I Got a Name »), to a Charles Fox TV theme song (« Wonder Woman »). With superb arrangements from his Musical Director/Pianist Tex Arnold and the jazzy bass of Jon Burr offering sensual support, Macauley not only proved he was up to singing a wide range of song styles, but he articulated the tunes in a way that conveyed the strength of Gimbel’s lyrics. He opened with the swinging « Let Go, » and from there never held back, following up on a chilly December night with a warm and cuddly medley of Jobim’s « Meditation » with Marcos Valle’s « Summer Samba. » Later, Macauley offered « Ipanema » and an adorable ballad-like version of the 1963 pop hit « I Will Follow Him » from a gay man’s point of view, and was wonderfully whispering and wistful on Gimbel’s lyrics and Michael Legrand’s melodies on a medley of « I Will Wait for You » and « Watch Watch Happens. » from the 1964 French musical film The Umbrellas of Cherbourg.

Throughout the set, Macauley engagingly offered enlightening stories about Gimbel’s life and personality (he really liked the ladies) and humorous anecdotes about musicals and films the lyricist worked on (including the very short-lived 1961 Broadway show The Conquering Hero and the 1970 black comedy filmWhere’s Poppa).  Macauley revealed before singing his encore, a deliciously lush rendition of « Live for Life » (music by Francis Lai) from the 1966 French film A Man and A Woman. It was the ideal lyric to end another year and a perfectly sublime cabaret show:

Come with me my love and seize the day and live it,
Live it fully live it fast.
Never thinking once about tomorrow,
Till tomorrow’s been and gone and past.
We’ll pour the wine and fill the cup of joy and drink it,
Drink as if it were the last.
Live, just live for life. 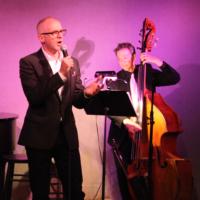 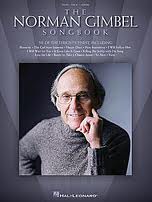