Here is an article published in the New York Magazine about this coming sensation.  What a great idea he had!

It all started when he was a wee lad. « I was best friends with my grandmother and spent a lot of time [going] through her old scrapbooks of her relatives and friends, » says photographer Ari Seth Cohen. « During that time, people were dressed to the nines, no matter how much money [they had]. » This inspired Cohen to launch Advanced Style, a street-style blog for the over-60 fashionable set — particularly refreshing given that much of what we see in street-style really is so youth-obsessed. In his forthcoming powerHouse Book by the same name, many of Cohen’s images will be published, including shots of Carmen Dell’Orefice, Mimi Weddell, and Alice Carey. Click ahead for a preview of the tome and read on for Cohen’s thoughts on his 50 grandmothers, where to find stylish older gentlemen, and why he dislikes shooting people his age.

How did the concept of Advanced Style begin?
When I was a child, I watched a lot of Bette Davis and Cary Grant movies with my grandmother. I’m attracted to that aesthetic of presentation, where they have this specific kind of glamour that doesn’t really exist today. I moved to New York when my grandmother passed away six years ago, and I saw all these wonderfully dressed older people that I wanted to shine a spotlight on. I hadn’t seen anything about age that anyone in my generation could relate to, and everything else was so youth-obsessed.

But, what specifically inspired you to, as it says on your blog, “photograph stylishly creative older folks”?
I think what really interested me was the elegance that these men and women display and a confidence. They’re not dressing for other people, they’re dressing for themselves — and that shows in the way they carry themselves. People treat older people like they’re invisible, but they no longer have anything to prove. They don’t have to impress anyone.

You’ve been blogging for almost four years now. Why did you decide to publish the book now?
I think people are looking at aging in a new way. Even in fashion, people are using older models. Marc Jacobs used my photos [according to Eric Wilson of the New York Times] as inspiration for his fall 2012 collection. It was also important to get it out now, as most of the women are 70-plus and the things they can teach us have to happen now. Zelda Kaplan once told me that you need to be interested in the world and you need to look outside of yourself.

How do you find your subjects? Are they really all found on the street?
Oh, yeah, definitely. There have been one or two that I’ve met through people, but I find most of them on the street. I walk around four or five times a day. Usually in the Upper East Side and Upper West Side, but I start in the East Village and walk the whole city because I don’t want it to be about class or money or certain ethnic backgrounds — I want it to be about the spirit of aging gracefully. I’ve become really good friends with most of them, and we’ll go to museums and hang out all the time.

So it’s almost like you’re with your grandmother again. What do you look for in your subjects?
Right, except now I have like 50 grandmas. It’s hard to explain; it can be the way that someone’s tied a scarf around their neck or the way that they did their hair in the morning. It’s really about the way they carry themselves and their spirit, more than anything. But, obviously, colors; I always look out for gray hair, you know, there are just certain things that stick out in a crowd. You see so many older women in New York, and you might not be paying attention, but if you really look, she really took care to tie her scarf and match it to a hat she may be wearing — and that’s important to me … [to show] people they should keep their eyes open to things they’re usually not looking at. It’s also nice to approach someone who might not usually have been approached on the street, and you start a conversation, and these women always say to me, « I’m not used to this, thank you so much, you made me feel better about myself. »

Most of your subjects are women, and you’ll sometimes shoot a couple, but it’s rare that I see an older gentleman.
I love the way older gentlemen dress. I was just in Rome and they were amazing, and definitely on Madison Avenue the men are really well-dressed. I think that older men dress great, but there’s an element of women needing some positive reinforcement, especially as they get older, in the media. So, that’s kind of my focus.

Who has been one of your favorite subjects? You mentioned Zelda Kaplan earlier.
Mimi Weddell. She was one of my muses, and she was actually once on the cover of New York Magazine years ago. She’s this incredibly elegant woman who started modeling at 65 and modeled for Louis Vuitton and Burberry. [But] every interaction I have is really meaningful.

Have you ever run into any difficulties shooting these stylish older folk?
Oh yeah, I think I’ve created a whole world of new divas. [Laughs.] No, well, the women who I shoot sometimes get recognized in New York, but I think that some older people aren’t used to being approached on the street, so they’re a little hesitant, if anything. More than difficulties, a lot of times people will say no, and then that’s hard because they’re something I want to share with everyone and then I don’t have the opportunity to photograph them.

Have you ever tried shooting the younger fashionable set?
I’ve done a few projects, but it’s just not what I’m interested in doing. There’s so much focus on younger people already that it’s important to show something different.

Which street-style photographers do you admire?
Obviously, I like Tommy Ton. His eye is great, and I love how his images tell a story. But there’s this girl named Tiny Toadstool in Japan, and she dresses really well. I like people who have blogs who aren’t only about themselves — or if they are, they have a message to them, because if it’s just people sitting around and photographing themselves, it’s just not interesting enough.

What’s the future of Advanced Style?
Well, right now I have a lot of promoting of the book to do, but I am working on the film with Lina Plioplyte. It’s about aging stylishly, so it’s women in New York who are telling a story from when they first lived here, and [they talk] about how their life and style have evolved over the years. I want it to be a portrait of aging in a fun, inspiring manner.

Here are a few of his models: 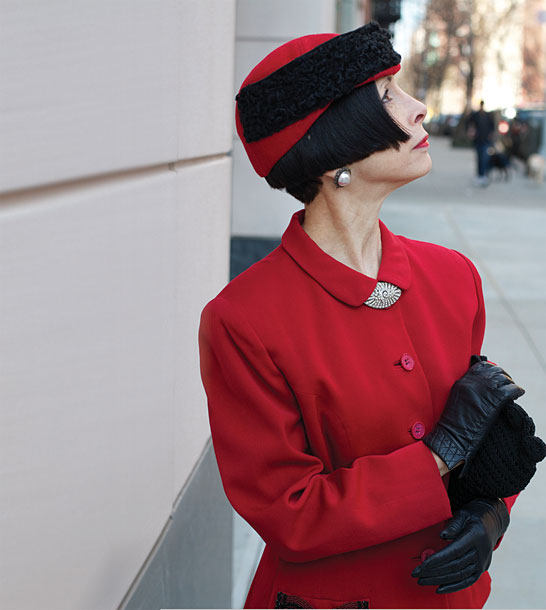 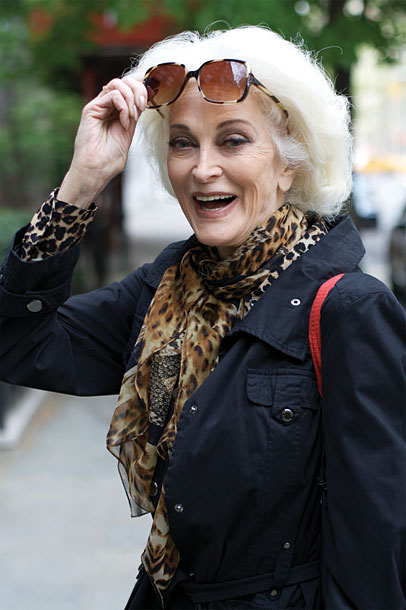 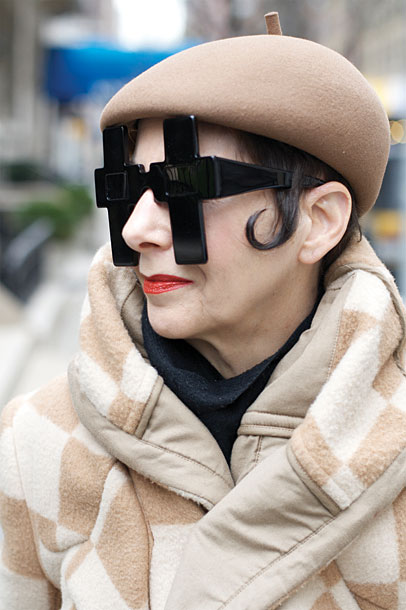 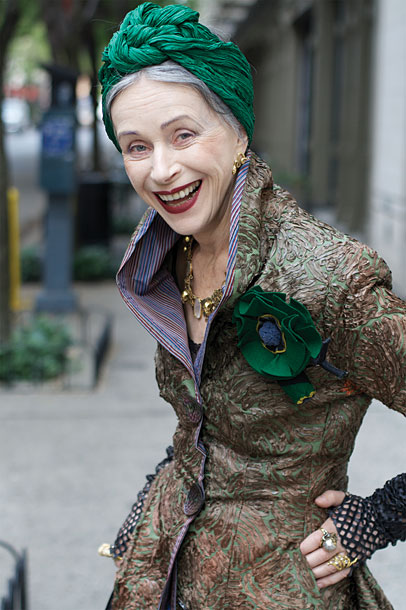 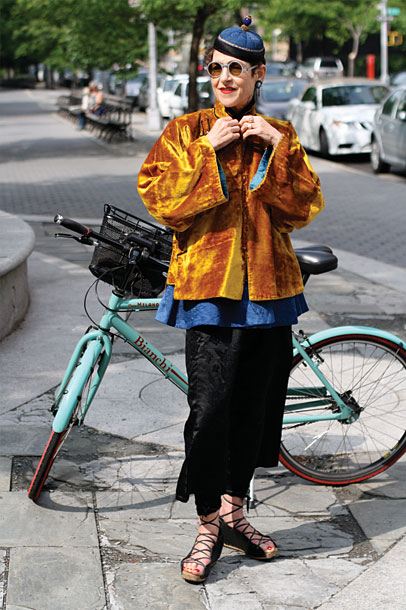 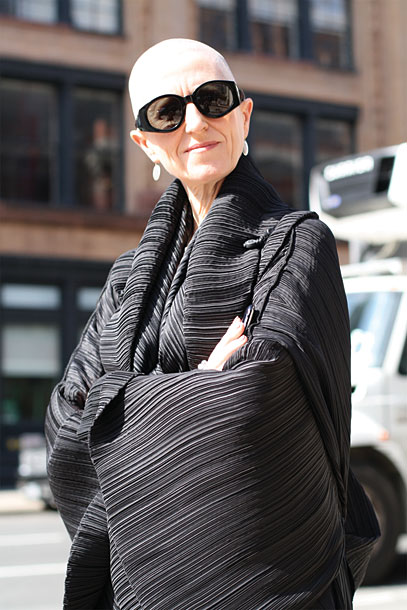 Are they not rockin’ gramdmas?